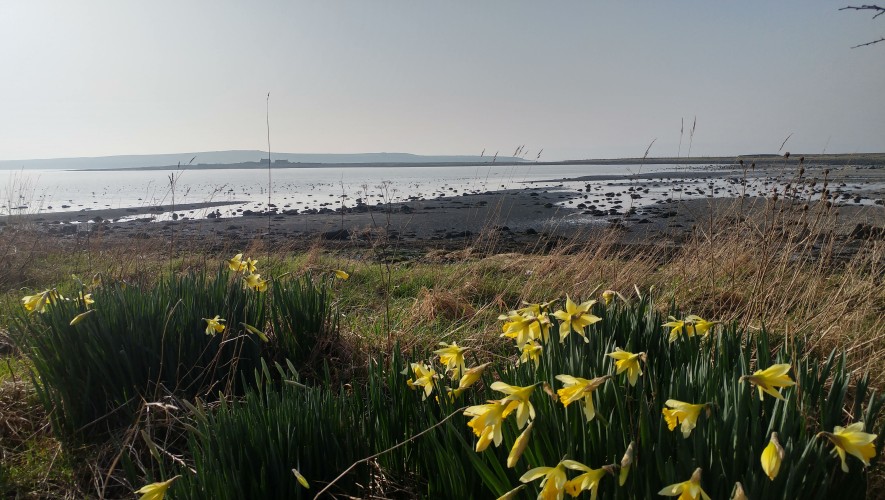 Knowing where to go

Route: Follow the West Island Way signs from Langalbuinoch farm and down to the shore, then turn SE along the beach, before following the signs around the edge of the airstrip to the road – Plan Road.

Terrain: Most of this route is grassy or mud track. There is a gentle slope down to the beach and the path is level thereafter.

You are moving further back in time, walking on Viking lands. The name Langalbuinoch is a hybrid of old Norse and Gaelic. Langa – a long field or enclosure, and Buin – my place. Here the Vikings and the Gaels met. Initially plundering the area, the Vikings seem to have quickly settled on the best farms and assimilated with the Scots-Gaels – merging aspects of language.

On the beach take time to pause and consider how readily travellers could land on this sandy shore, and the many like it along Bute’s western margins. From Neolithic times people have arrived via the major sea route in front of you. Celtic saints came to look for wilderness, and found a garden.

Turn from the beach, and as you pass the airstrip on your left, the modern and the ancient, clash. You are walking over an area that would have been covered by the sea in the past, creating a narrow isthmus – an Eid in Norse. This isthmus – a place of connecting – joined the south of the island with mainland Bute. Now it connects peoples over time; neolithic, iron- and bronze-age to modern times.

On this narrow strip of land Neolithic settlers set up standing stones. Small stone circles formed part of their religious rites. Where the path joins the road, you can walk a few hundred yards north and see one of these circles at Black Park.

People have sought God in this place for millennia.

Think as you go

Often we travel with a destination in mind, holding a fixed view of what we want to find when we arrive. This can be a sensible and safe approach. Vikings came with hearts set on treasure, plunder to take home, and found something worth staying for. Celtic saints set out to journey with God, to explore the sea ways and paths that fell before them, travelling without a clear plan.

Is it time to set aside your visions and allow God to guide you? Others have for years.

Matthew 6:25-26 (CSBBible)
25  “Therefore I tell you: Don’t worry about your life, what you will eat or what you will drink; or about your body, what you will wear. Isn’t life more than food and the body more than clothing?
26  Consider the birds of the sky: They don’t sow or reap or gather into barns, yet your heavenly Father feeds them. Aren’t you worth more than they?